Brewer’s Note: “Golden Blonde 6% alc., Malty, with a fine bitterness and with a long finish. The nose is complex, and develops an intense fruity hopped aroma.” 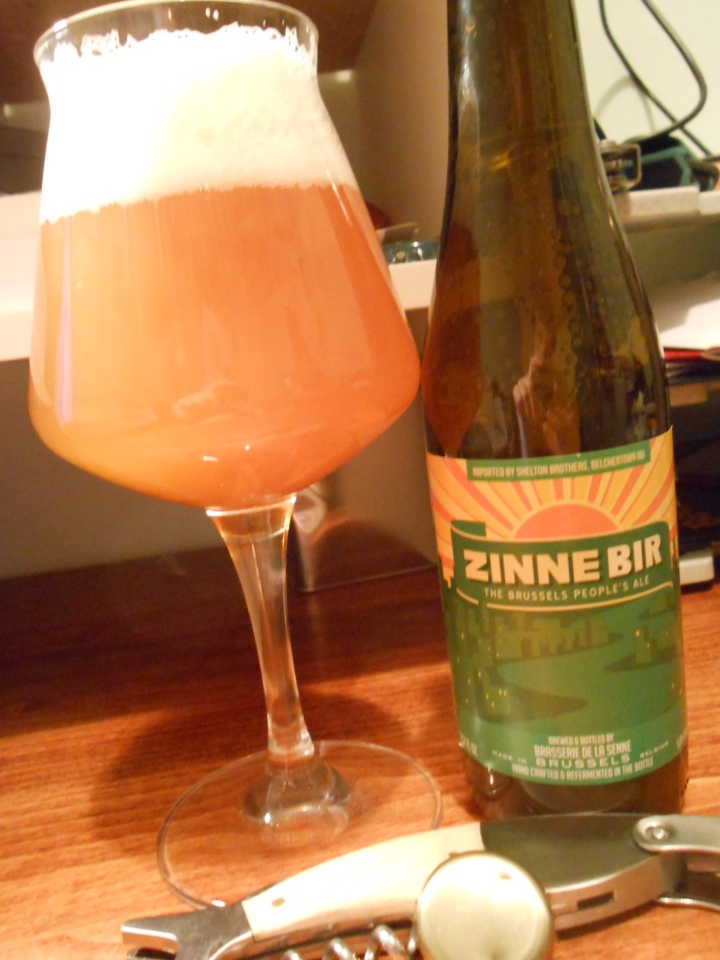 The beer’s label has an awesome Art Deco look to its graphic, which I really appreciate. The font is a little old school, but eye catching, and the green and yellow color scheme is nice and funky. I really like this label, though the bottom of the label does suffer from a bit of text clutter. In the end, this label is worthy of scrapbooking for sure.

The beer pours a hazy, golden-orange with a huge head of small bubbles that erupt into a more rocky terrain as they climb higher and higher above the beer. The head sits about two finger’s widths above the glass with excellent retention. When the head does go, it leaves a fat cloud of puffy lacing along the glass. In body, the beer is a nice hazy murk with no trace of floating particles. I poured the yeast in with this beer for added flavor, but it did appear rather clear before I dumped the yeast. On the nose, the beer smells of honey and hay. Grassy hops kick just a touch of citric lemon grass and there is also a whisper of funk can also be sensed. All the while, malt provides beautifully creamy honey nuances to the nose. I do also detect a touch of skunk, which is expected in a hoppier import, but does not take away from the rich smells of the beer. On the tongue, the beer tastes honey-sweet and grassy-bitter. The bitter tend more towards the middle and second half of the sip, while the sweetness begins and finishes the beer. Light acidity does interact with the other tastes, and an herbal bitterness works its way in beside the grassy bitters. In flavor, the beer begins as smooth honey malt with a touch of bread. This transitions into rich grassy bitters with nuances of herbal mint. The finish is strong with rich honey flavors drizzled over light toast with a healthy wallop of grass and hay. The aftertaste is decidedly of bitter mint with just a wisp of lingering honey. In the mouth, the beer feels on the light side of medium in body with a crisp yet smooth mouthfeel that gives a nice little tug at the tongue, but doesn’t overdo it. Carbonation is a little higher than middling, providing a nice scrub to the tongue. After the beer leaves, the mouth is left with a slight bit of spittle and a touch of astringency on the middle of the tongue, but an overall feeling of cleanness. As a whole, the beer is quaffable and subtly complex with some great grassy hop character and superb honey malt. This beer is just a great classic beer with superb honey malts and a nice European hop bite. I could have a few and be happy. I like it.