Brewer’s Note: “Cuvee is a bit of a hybrid, in that the base recipe is a sort of a cross between a Belgian Quad and Imperial Porter. Dark candi syrup and black currants add a depth of character and back up the malt and fermentation character.” The beer was then aged on both American and French Oak” (From Churchyard Brewery’s Blog)

The beer pours a muddy, dark brown with caramel and molasses highlights.  A nice and loud head of tiny, tan bubbles form a head and then fizzle away to nothing on the glass leaving a tiny island of scrim and a very thin rim of bubbles.  In body, the beer is dark, and almost black ruby colored in the light. No particles seem to be present in the body, but it is a little too dark to know for sure. Carbonation bubbles can just barely be glimpsed through the glass, peppering the head at a nice rate. When swirled, the beer leaves thin and drizzly legs of alcohol on the sides of the glass. On the nose, the beer smells of a fruity funk mixed with cola sweetness and a touch of raisins. Cherry coke comes to mind, with splashes of light pineapple and faint lemon/lime. Fainter still is the malt presence, but it gives a soft, brown sugar sense to the beer, while syrupy alcohol lurks beneath the entire scent. As it warms, chocolate and light French roast coffee can also be detected in the scent. On the tongue, the beer tastes tart with fruity acidity, which mellows into tannic bitters with a touch of herbal bitters and a strong, malt and yeast sweetness that is reminiscent of a quad. Booze, much like in the smell, lurks beneath everything but never really shows its ugly head, which speaks wonders for this beer’s balance. Dry, bitter roast malt sits pleasantly in the aftertaste. Wow. The beer feels on the plus side of medium in body, with a sharp and prickly carbonation that reminds me of drinking coke.  Smooth, and gently oily in mouthfeel, the beer oozes over the tongue with subtle grace. The mouth is left sticky on the sides of the cheeks, like a wild ale often does, yet roasted dry on the tongue, like after a good dry porter. In flavor, the beer begins as tart funk, moving from sweet cherry, to candied watermelon, to light pineapple, to malic green apple, and back to sweet cherry.  This slowly builds into a long and luxurious finish of tannic, oaky wood, vanilla, raisins, and a green tea-like funk. At the final explosion of flavor, the tongue is blanketed in creamy, roasted chocolate and smooth coffee.  The tart cherry flavor lasts along the middle of the tongue throughout the entire taste, but the aftertaste is all about the roasted malts chocolate and coffee nuances.  The funk is not huge in this beer, instead it is just one part of its complex flavor profile.  This beer is a wild ale, a stout, and a quad all mixed into one.  This beer is a beautiful blend of styles, with artful nuances coming through.  The funk is not quite as pronounced as I was first hoping it would be, but honestly, I like it more this way. This beer is about delicate balance and restraint between three very dominant flavor profiles, and it pulls this off wonderfully. I do wish the nose was a little more nuanced and stronger, but it still is pretty damn good. This is a perfect beer to be sipped as the months grow colder and the days shorter. I would love to have one of these for Christmas dessert, and I cannot wait to see the variations that Trillium plans to release of this beer. The brewery said they were going to bottle this later in the fall, and that their bottling line was being looked at today, and all I can say is please hurry up and do that! This beer is great. 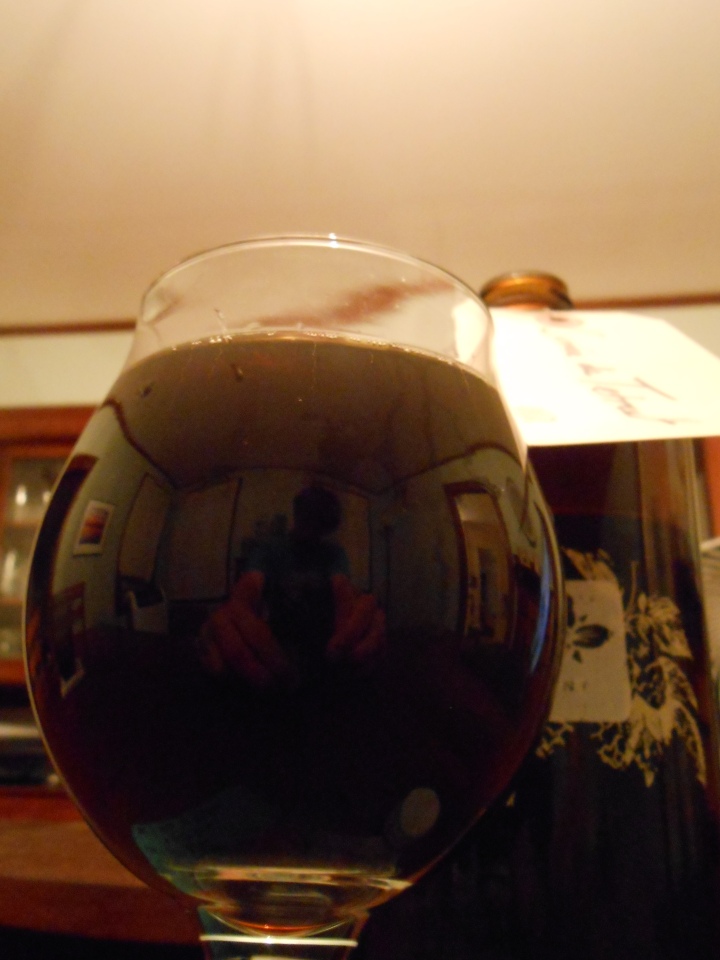