Brewer’s Note: “Donkey-Hote (prob.: Don Quixote) is our ass-kicking double IPA.  Golden in color and just slightly malty to balance the abundance of hops (106 IBUs), Donkey-Hote gallantly adheres to our local mission by using ‘old school’   citrusy hops grown on the East Coast, including Cascade and Centennial.  Pair this bold beer with bold falvors, such as grilled or cured meats, strong cheeses, or chicken wings.”

The beer’s label a little goofy and cartoonish, but somehow it doesn’t come off as childish, like the Longtrail labels.  It is goofy yet crisp with a little bit of clutter only because of the text on the right side of the bottle and the boring info on the text.  I love the brewery font at the top of the bottle as it is crisp yet interesting.  The simpler font that is used for the rest of the label is easy to read but is a touch boring.  The color scheme for the bottle is neat with its black and orange.  This label is definitely worthy of scrapbooking, but falls a little short of my standards for shelving.

The beer pours a dark and muddled, caramel brown with a beautiful head of tiny, slightly creamy, white bubbles.  In body, the beer is dark and impenetrable to the eye, giving off a deep mahogany hue.  On the nose, the beer smells like an old school IPA.  Bitter, pithy grapefruit tangoes with pine and a beautiful underlying sweet caramel smell that gives just a touch of toffee and, unfortunately, cloying alcohol.  It actually reminds me slightly of an amped up Harpoon IPA.  On the tongue, the beer tastes initially caramel sweet, slowly working into a deep bitter flavor while never fully killing the sweetness.  The mouth does fill with saliva from a slight acidity coming from the hops.  In flavor the beer begins as rich molasses and caramel candy malts with nuances of toffee.  This candy sweetness is eventually married with a growing citric grapefruit and bristling pine.  The finish is an odd marriage of the two, with the candy sweetness again touching the tongue alongside slight breadiness.  The aftertaste turns towards a more expected flavoring of bitter grapefruit and pine, with touches of medicinal bitters thrown in and a touch of wood.  In the mouth, the beer feels on the heavy side of medium in body with a slick and slightly syrupy mouthfeel.  Carbonation puts a bit of a prickle to the tongue, but leaves no bite.  The mouth is left bitter-dry except for where saliva pools to cancel out the acids.  Overall, I’m not quite sure what to think of this beer.  It is definitely closer in style to old school Double IPA’s, and has way more of a malt character than I normally like in my DIPA’s, but at the same time it is interesting, and really has a great malt quality to it that is simply balanced out by the big hops.  I almost wish they would bump this ale up into the barleywine or American Strong Ale styles, if just to see more of the malts play through on the tongue.  Alcohol is nicely hidden in the taste but comes through a bit on the nose.  This is not what one normally looks for in a DIPA, but is tasty and interesting and worth trying, if a little too sweet.  A nice shout-out to the past, and a great malt character. 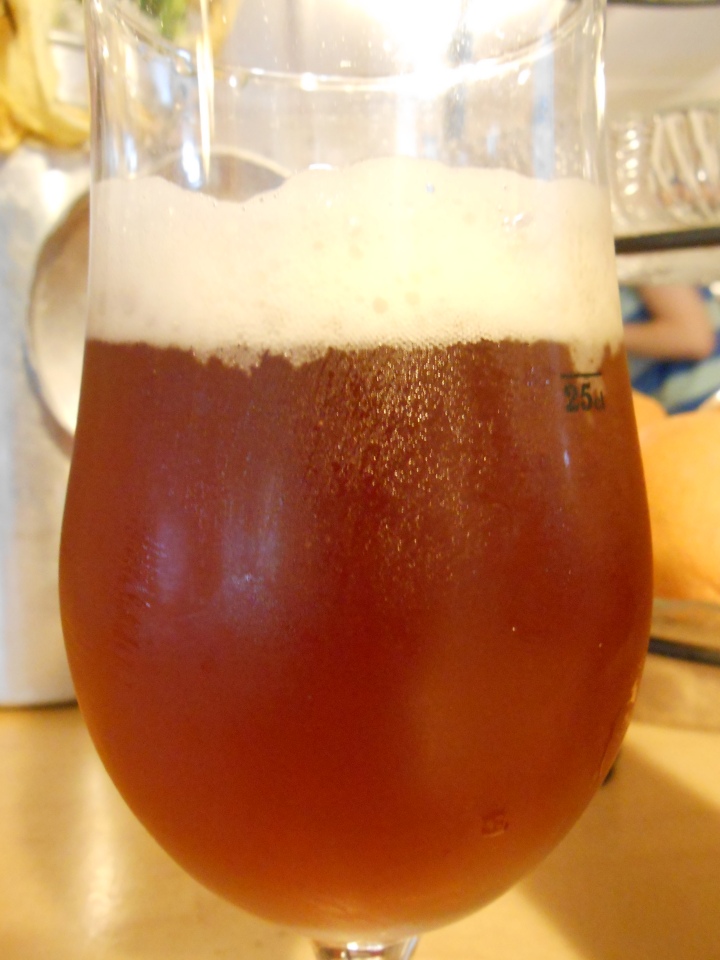