Brewer’s Note: “The year is 63 A.D. at a Roman encampment near the present-day Belgian town of Bilcqy.  Nervium Flavius, a Roman soldier recently posted to Gaul, is thirsty.  He approaches Eburane, the young woman in the encampment’s popina. He demands his posca, fully expecting to get the sour wine drink loved by all legionnaires.  Eburane says she has no posca, but – exhibiting the Belgic knack for adapting to foreigners and their tastes – quickly adds she has Posca Rustica, a local brewed version.  Too thirsty to argue, Flavius gruffly quaffs the strange, blond, frothy drink.  It is not sour, but herbal and wonderfully spiced.  It is the Cevesia of the local tribes, the Eburani, Nervii, and Ambiani.  Instead of complaining, Flavius gladly finishes the delicious ale.  The beer becomes a favorite among all the legionnaires.  To this day you can hear their joy every time a Belgian toasts by saying “Proost!” It comes from the roman soldiers’ shortened cry, “Prustica!” for their cherished drink of Gallo-Belgica, Posca Rustica!”

Note on the Beer from Internet: “Since 1983, Dupont has produced a beer especially for a Gallo-Roman site near the brewery where Stone Age life is interpreted, the Archeosite d’Aubechies. Known as Cervesia in Belgium this beer is a throwback inspired by research into the drinks of the Gallo-Roman era. It is surely one of the brewery’s most exotic beers. It is a “Cervoise” beer spiced with a gruit (an old-fashioned herb mixture used to bitter and flavor beer, that was popular before hops came to predominate). Posca Rustica beer is highly, if delicately, spiced. Sweet woodruff (known as Galium odoratum or wild baby’s breath) and bog myrtle are but two of about a dozen spices used. Posca Rustica has a unique, odiferous and spicy character. Bottle conditioned. Beguiling and unusual. Discover what beer tasted like when Belgium was ruled by the Roman Empire.” 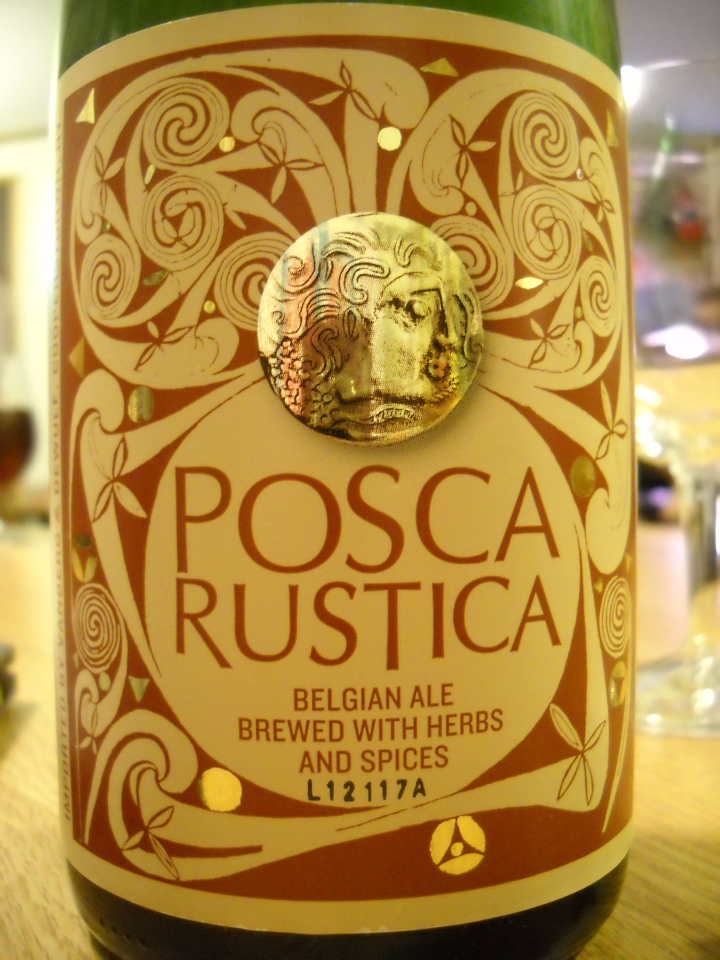 This beer’s label is ancient and Roman, which works nicely with the beer.  I love the head at a coin at the middle of label, and I love the weird flowery shapes that circle around the head, and somehow look Roman.  The font is funky yet simple, and works very well with the design, and the color choices are prefect for the label and the Roman flair that the brewery was trying to produce.  There is a little bit of boring text and clutter on the edges of the label, which could have done with their own back label, but overall this is a nice example of ancient art.  A label to shelve or scrapbook for sure!

The beer pours a murky, muddy orange with copper highlights.  The beer pours with a lovely uniform head of medium sized, slightly creamy, white bubbles.  In body, this beer is swamp water murky and impenetrable to the eye.  On the nose, the beer smells of grainy funk with minty, herbal scents that play into the aroma.  This beer definitely has the Dupont yeast funk in it, smelling nearly skunked, but also of grainy cereal and a touch of lemon citrus.  The funk brings some wonderful spice into the nose, moving from pepper to barnyard, and then to an unnamable spice.  On the tongue, the beer tastes surprisingly sweet with an herbal bitter backing.  In flavor the beer begins as very sweet caramel apple and pear, which blends with funky barnyard flavors to dry itself out a touch, but not enough.  The flavor moves into grassy, herbal funky flavors in the middle of the taste that blends with sweet cider-like flavors and chamomile.  The finish is very sweet grassy flavors mixing with the herbal chamomile and light pear notes.  The aftertaste is slightly funky with a sweet lingering flavor.  The sweet flavors in this beer are surprisingly high, especially for a Dupont beer, but they do manage to stay just below cloying, which is a nice achievement.  In the mouth, the beer feels on the heavier side of medium in body with a creamy soft carbonation that coddles the tongue a little too much and allows for that sweetness to run through the mouth.  The mouth is left tingly, but clean.  Overall, this is a really sweet saison/gruit.  It also has far more of the saison characteristics to it than the herbal gruit character that I was hoping for.  Its sweetness is a tad too much for me, and makes the beer feel syrupy in my mouth, almost like a too sweet tea mixed with a saison.  Actually, the more I think about it, the more it tastes like a plain old Belgian Pale Ale to me.  In the end it is a good beer, but I wish they had dried out the sweetness more and brought out more herbal flavors.  Personally, I would choose any of the other offerings of Dupont before I came back for this beer again.