Brewer’s Note: “Swing. It’s a lively jazz rhythm, a vigorous sway, a change of view or even a roll in the proverbial hay. Now, it also means the welcome jolt of joy you’ll experience upon your first sip of this session saison. Swing into spring with taste!”

The beer’s label is meh.   It has some peaches or something blurry sitting behind the beer’s name, which I suppose is to promote images of leisure and summer, but overall it is just odd since the beer does not actually have peaches in it.  The Victory symbol is cool, and the fonts are all nice, but a little too crisp for the rest of the label.  The neck label is also very mass produced in feeling, and overall just ugly.  Clutter is surprisingly not bad on this label… I think this is the first label I have disliked that has been okay with clutter… It just is weird and boring.  The colors are also mute.  This label is not worthy of saving. 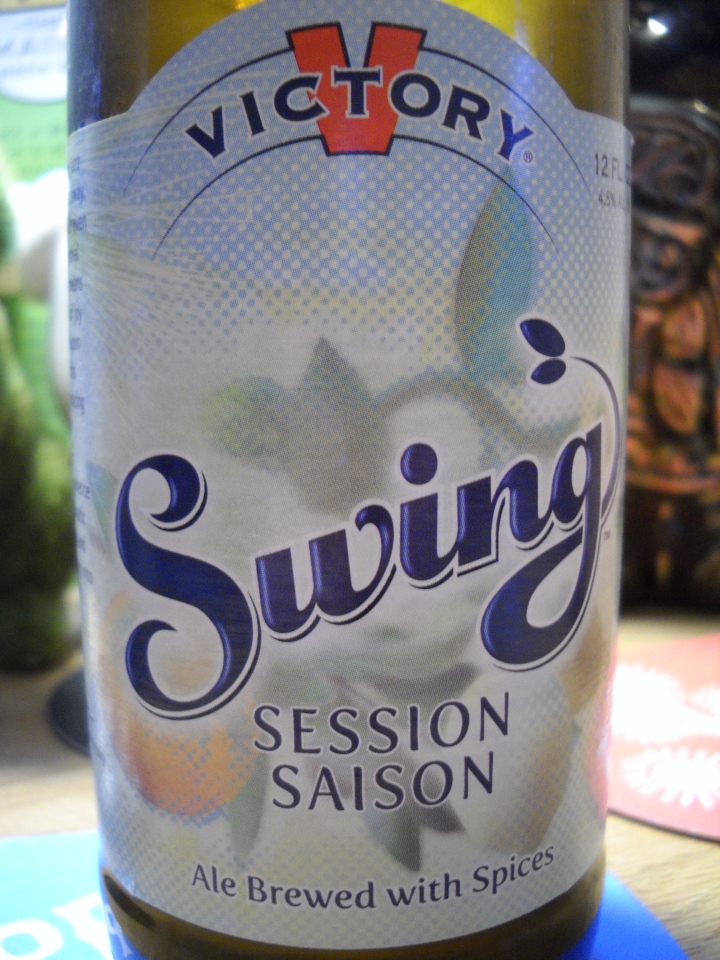 The beer pours a straw yellow color with some nice light golden tints and a soft white head that fizzles away to just a scrim, leaving some medium sheets of tight-bubbled lacing on the glass.  As you sip the beer though, it tends to only leave thin and droopy tendrils of lacing on the glass.  In the body, the beer is properly hazy, though some light does make its way through the beer.  The beer also displays a nice torrent of bubbles working their way to the head.  On the nose, the beer is nicely pungent from the moment it pours.  It smells of funky straw and lemon grains with touches of banana and cloves with just a hint of uncharacterized spice in the nose.  The yeast esters are very big and tangible on the nose, almost dripping off, which is lovely in a 4.5% beer.  The overall mélange of smells does give a slightly skunked smell, but I think that is more from all of the spices and yeast esters mixing together into a strange potpourri, and less from light exposure.  On the tongue, the beer tastes of grassy bitters, sweet spices, and funky yeast character that moves from bitter to sweet, to acidic, and leaves a nice bit of neutralizing saliva behind.  In flavors, the beer begins with funky bitter grass, which opens into lovely banana esters with touches of cloves and some coriander as well.  Lemon citrus runs on the lesser side of the flavors, and melds with some of the breadier characteristics of the yeast and the light clean malt flavors.  The finish is big with coriander spice, slight orange peel, and some funky banana/clove esters, and the aftertaste continues this with the addition of slightly medicinal, grassy bitters that tingle on the tongue.  Judging by the taste, I would not say this beer is 4.5% ABV.  In the mouth, the beer feels medium to medium-light in body with a big fluffy carbonation that provides some tongue scrubbing to keep the sweeter yeast and spice characteristics from overpowering the bitters.  The mouth is left slightly chalky and tingling with some saliva on the sides of the tongue.  Overall, this is a great normal saison, and the fact that it is 4.5% and fully sessionable makes it all the better.  Its flavor profile slightly reminded me of a less coriander-heavy Hennepin from Brewery Ommegang.  It was phenomenally full of flavor, and comparable to my personal favorite session saison, Notch Sasion.  My one complaint with this beer is that, in the belly, it seems to carry a little bit more weight than I normally like from a 4.5% beer, but it is not to such a degree that it ruins this beer.  This beer is good, and great for a long drinking night.  Try it.