Brewer’s Notes:  “The ‘liquid gold”, with its wild spices and incomparable flavor so precious to ancient explorers, could only be brewed in the High Lands of America.  Travelers of old, it was said, would gladly go to the ends of the world to reach La Fin du Monde!”

Alas, a beer for the end of the world, and what better beer than La Fin Du Monde?  Sure there are other brewers making beers for our upcoming annihilation, but La Fin Du Monde is Canadian, and if anyone is going to survive this shit it’s the Canadians, so I figured I would please them and give this blog a chance to continue on by pandering to the likely survivors, even after I have been swallowed by the foul and hellish fires of 12/21/12 and the Mayan calendar…

We’ll start this review with the bottle, and I must admit that I like this bottle.  I have a love/hate relationship with Unibroue’s bottle designs, but La Fin Du Monde is elegant and classy without having the weird goofiness of some of Unibroue’s labels.  My biggest complaint with the bottle is that this bottle has a twist off cap, which completely clashes with the classy label and the fancy foil wrapper over the bottle cap and neck.  I love the bruised purple, silver, and fire-red/orange color scheme on the label.  I also love the orange globe with a close up of a shining Quebec.  The font choice is a little goofy and bland, though it does seem to work with the label.  The information on the bottom of the label takes away from the awesome graphic, though, and really should be better placed, or moved to the back label.  I like the winged U and the name of the brewery being displayed on the foil.  Overall, this bottle is worthy of your shelf, or at least for scrapbooking.

The beer pours an ugly piss yellow with hints of orange and with a very soapy head on it that fizzles away slowly, and sits over the beer as the color of soap bubbles.  The beer’s body is cloudy like piss, but allows a fair amount of light through.  On the nose, this beer smells of soy sauce and banana phenol notes with some very slight bubblegum hints.  Fruity soy sauce is really what comes to mind when you smell it, though not in an entirely bad way.  On the tongue, the beer tastes of creamy banana, soy, and some nice clove-like spice.  The beer really begins with light soy notes that grow in fruitiness until they hit banana flavors, and all the while the spicy clove also builds on the sides of the flavor, and leaves the aftertaste to ring lightly of spice and slight banana.  The middle of the taste is really where this beer shines, with big spicy cream banana notes that are quite pleasant on the taste buds.  On the mouth, this beer feels quite fierce with carbonation, though the beer below it sits with a nice medium body that sticks to the tongue, and leaves the mouth clean, but with sticky saliva along the sides of the mouth.  Overall, this is a nice tripel-style ale with some great phenolic notes, and some nice spicy complexity.  A fitting beer to end the world with, I suppose, though it isn’t my favorite in the style.  Still, this beer is worthy of a try.  Cheers and beers, and best of luck surviving la fin du monde, everyone. 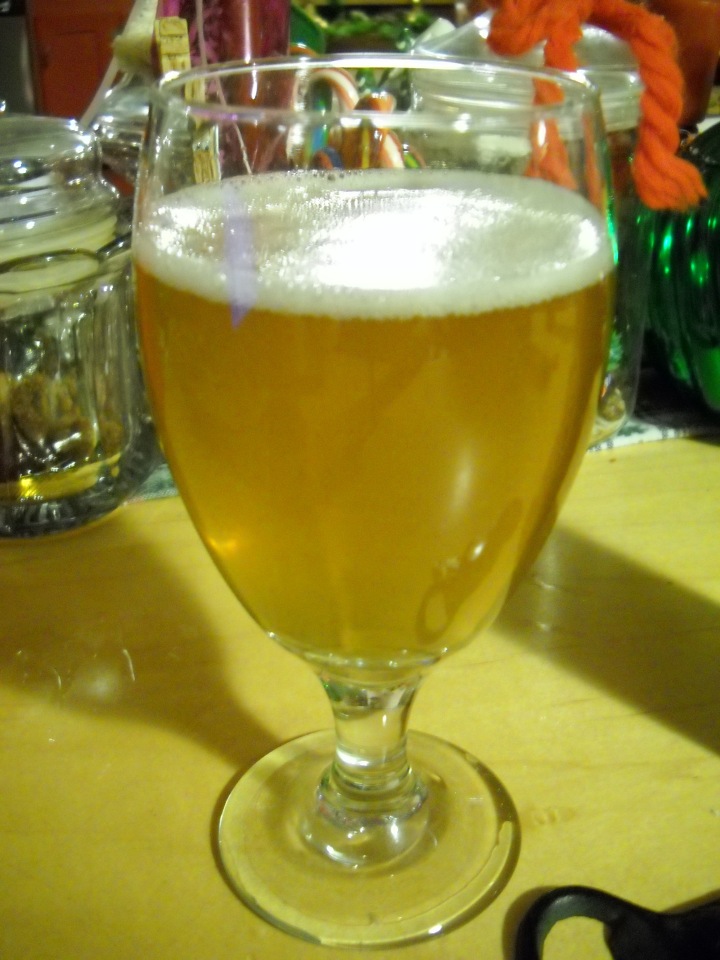